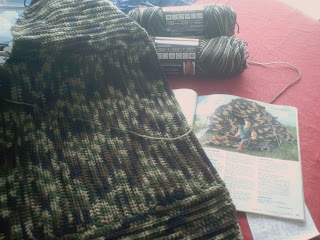 I still am crocheting and taking pictures of stuff, even though I'm not so good at keeping my blog up. This is a tent I have been working on. Long story. I might have mentioned it here already. I sent my friend a dishcloth I knitted. Her daughter confiscated it to use as a rug in her Barbie Dream House. :P I said 'Awwww.... I can crochet her a rug for her Barbie house!... I can crochet her a lot of stuff for it...' Well, then I thought, 'I can't just send her something, now I will have to make something for her brother...' So I thought of this tent, which our 7 year old also wants one of... (Sigh...) Soon as I am done with this one. It's from an issue of Crochet World, I forget which one. And this is the Barbie furniture, which is finished (woo hoo): 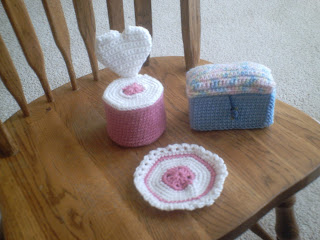 I tried out Tam's dishcloth pattern from her blog (saw it on Dishcloth CAL 2010 at Crochetville). I made a mistake on the middle garter stitch rib. I also knit it on size 7's not 10's. Oh well. I still think it's cute. I put it in my charity pile. 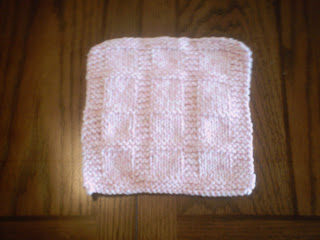 I got a couple RAOKs!! This one is a couple weeks old, from Serena at Crochetmania. I forgot she had said she was going to send me the afghan pattern book; and she sent me some scrap yarns. Yay!! (That's one of the things on my wishlist.) Thank you, Serena! 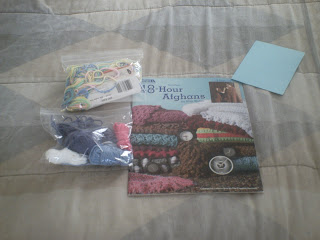 And just last week, I stopped by my PO box, and I got another RAOK! From Crochetville, this time. Some more scrap yarn!! And pens. (Another thing on my list.) There actually were three pens, but our 7 year old thought the third pen was SO cool. So I let him have it. (See why I have pens on my wishlist, I can never hold on to them in this house, LOL...) She also sent me two dishcloths, which I already have used and washed, even! :P You can see I already crocheted some yo-yos with some of the yarn she sent me. :D 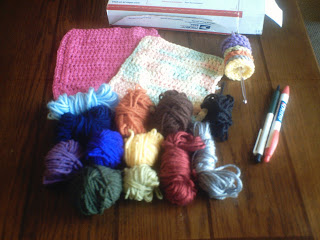 This *was* the Forest Flowers Pullover I had started, from the Spring issue of Interweave Crochets, '09. I was using Red Heart in 'Aruba Sea'. I love how it was looking, but HATED how it felt. I got almost done with the whole front of it, then frogged it. I am going to try a different yarn. I think I'll make it in the colors they used in the mag. I got to go to JoAnns today (Wahooo!!!), and I got a skein of 'chocolate' and 'asparagus' to go with the off-white/ecru I am thinking about using for this... Going to put it on hold for a while til I get some other projects finished, first... 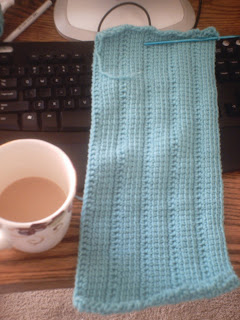 I started a new sweater with the Aruba Sea, too. (Same magazine) I forget what it is called. It's a cardigan, long... You can see what it looks like in the picture. :) Amazing Grace or something? 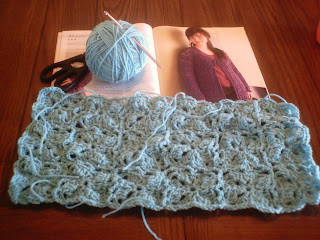 I also started a skirt!!!!! I am going nuts here. I guess I should just give it up, trying to scale down my WIP list. It's the only thing I can be *bad* with, I can't eat anything, cuz I'm trying to lose weight. Sigh. Anyway, the skirt is called 'Mauve' at Ravelry. (I am not making mine in mauve, though-- "Burgundy Sprinkles'; Wool Ease.) I became obssessed with crocheting or knitting a skirt, somehow. I went through all my patterns, searched patterns online.... I didn't have any of the yarn I needed to make any other ones, so I just decided to do squares and sew them up. I forgot to mention, I don't technically even have a pattern for this, just saw pics of some on Ravelry. But I do have the pattern for the square they used to do it with. So I am going to just wing the rest. I also bought fabric for a liner, and a pattern to do a skirt with. I really don't know if it will all work out... But it's fun doing it. I made an afghan for my husband, for one of our first wedding anniversaries; with this exact same square pattern, too. :P Well that's about all for now.
Posted by Tina at 5:50 PM

wow, lots of nice stuff Tina!
Its easy to fall in love with those cute Barbie furniture :-)
I have a crochet skirt design too, in case you forgot ;) I want to wear it, but I hardly wear skirts in public anymore :( I also needed to sew a garter in the waist so it won't slip off :p

Yes, I saw that one on your blog. :) I have been wondering if I will actually wear it when it is done...